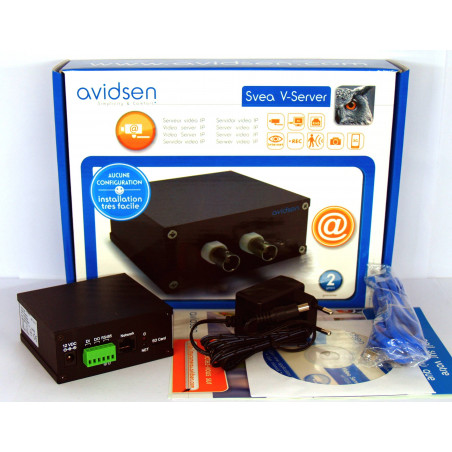 Through this device it is possible to make analog video surveillance cameras of modern IP cameras. This device allows the camera to be viewed via the internet without the need for any router configuration thanks to the CLOUD technology it is equipped with. It also has an internal DVR that allows recording on motion or continuous on a NAS or on an SD card that can be installed in the special micro SD reader that the device is equipped with. Equipped with Motion Detection for sending emails and starting registration. It also allows you to manage RS485 communication with cameras having this interface. It has a DI input to which alarm sending functions can be associated and it has a DO relay digital output capable of driving devices such as sirens or lights. Supplied with PC software to create a powerful recording vision system. Compatible with third party software and mobile devices thanks to the RTSP protocol.

• The video server is for internal use only. Very simple to install, it can be installed on the wall, ceiling ... Automatic correction of exposure mode and white setting.
• Each camera has a unique ID and password (supplied) required to view the camera (no IP address or other complex configurations).
• Allows viewing of up to 36 IP cameras simultaneously from a PC connected to the Internet.
• Ability to capture a live screen (jpg) image of a room.
• Ability to start a live recording (on the hard drive of the PC on which the software is launched) and schedule recordings for the week. Possibility of recording with motion detection.
• Possibility of displaying multiple cameras in cyclical mode: automatic programming passages from one display window to another. Possibility to view also Quad.
• The supplied software has a special player that can read recorded videos.
• The video server connects directly to an analog camera and converts any analog video source to digital video with MPEG-4 compression. Digital Videos can then be sent over the Internet and can be accessed from any Internet Explorer. The camera now functions as an IP camera.
• Ability to monitor, record and take photos using provided software.
• Ability to configure the camera to notify the user by e-mail or by sending a photo to an FTP server.
• Ability to monitor the camera from a mobile phone connected via a 3G network (specific application).
• Ability to record video to NAS or micro SD card (maximum capacity 16GB not included), motion detection, manual or scheduled mode.